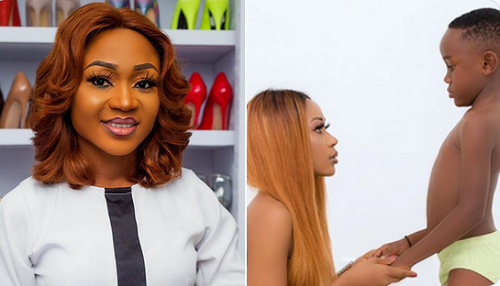 Pieces of credible information reaching us indicate that Ghanaian actress and video vixen Rosemond Brown famously known as Akuapem Poloo has been sentenced to 90 days imprisonment.

The actress shared a naked picture of her together with her son on social media on June 30, 2020, when she celebrated her son’s seventh birthday by posting the photo on her Instagram page, which went viral on social media.

The pictures attracted criticism and accusations that she was undermining the dignity of her seven-year-old son, among other things.

Rosemond Brown, also known as Akuapem Poloo, faces a possible fine of up to GHS 6,000 or a jail sentence not exceeding two years.

The complainant in the case is Bright Appiah, who is the Director of Child Rights International Ghana.

He petitioned the police after the incriminating photo went viral on social media, and the matter was referred to the Domestic Violence and Victims Support Unit (DOVVSU).

Rosemond Brown has received some support from Ghanaians who have described her conviction as harsh.

Prominent Ghanaians in the entertainment industry like rapper Sarkodie have also voiced their support for Rosemond Brown. Akuapem Poloo Finally Shares The DM’s She Got From Actress Mercy Johnson And Mr. Eazi Whiles She Was In Nsawam Prison (+VIDEO) I Have Dropped The Defamation Case Against Akuapem Poloo After Her Mother Called And Was Crying On The Phone But I Have Blocked... I used my last money to buy expensive underwear just to...