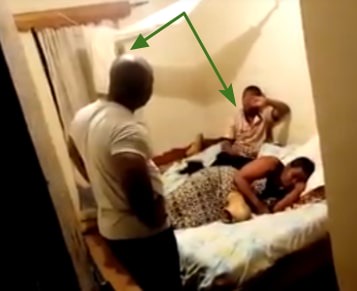 Mr. Koomson Caught His Wife In Bed With His Uncle. What He Did Will Amaze You (+Video)

Mr. Koomson got married to his beautiful wife years ago. He was a wealthy man who owned so many businesses including drug stores and chairs and canopy renting. As a businessman, he barely had a week to stay at home and relax his body or have some good sleep.

He was always out of the country or supervising his numerous businesses. Although he had grown up children who could assist him manage his business, he sent them to study and live in abroad. They only came down for vacations.

In other not for his wife to be lonely with the kids alone, he trusted his uncle to come live in his house with his wife, so he could be a source of company for the wife when he is away.

The wife and the uncle lived in peace and harmony for close to 5 years but something happened. They started having feelings for each other. The uncle that Mr. Koomson wanted him to be gradually turned into a lover.

They started seeing each other from time to time when the kids were asleep. Mr. Koomson trusted his uncle so much that, he never imagined he could do that to him behind his back. They played this game for a long time and even aborted once. That should have prompted them to stop, but they kept the ball rolling.

One fateful night, Mr. Koomson wanted to surprise them on his arrival by not pre informing them. He came home and he was surprised himself.

On his matrimonial bed was his uncle and his wife busily making love. They were so blinded by the act to the point that, they did not recognize his presence for almost 8 minutes.

Mr. Koomson had to scream on them before they realized they were not alone. After catching them red-handed, he did not act harshly as many men would have done.

He quietly went to another bedroom and rested. The next day the uncle was gone, but his wife was still there. Mr. Koomson acted as if nothing has happened the previous day. His character did not change, he had conversations with his wife.

But deep down in his heart he was hurt. Two months later, his wife parked her belongings and left with fear that her husband might do something bad to her. She left because of guilt, she was suffering within her.

Two Ghanaian [email protected] have been caught doing it raw in Saudi...

[WATCH VIDEO] This is why Shatta Wale was chased out of...