Home Entertainment News My Police Boyfriend Used His Gun To Shoot My Mouth When I... 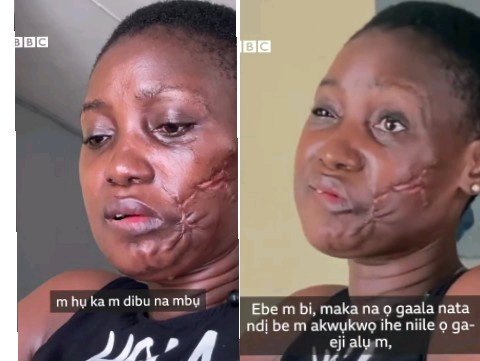 Some people have passed through a lot of things because of the people that claim they love ’em. Some people have met their untimely death because of their lovers, it is no more a new thing to any of us. This happens when there is a very deep disagreement betwen them or when any of them cheats. A lady known as Isioma Joy has been disfigured by her police officer boyfriend on a fateful day she visited him in his house.

According to reports, the lady was interviewed after what she passed through. Before I start telling you what she said during the interview, let me tell you something first. The lady’s police boyfriend shot her mouth when she visited him. According to the lady, she said that she was in a relationship with her police boyfriend. They both loved each other very much, but her boyfriend suddenly came up one day and said that he’s no more interested in the relationship.

She didn’t argue with him at all, she only said that since that’s what he wants, there’s no problem, so they parted ways. Some days after they separated, he called her and told her to come to his house, then she went. When she went to his house, he told her that he doesn’t want to hear that someone knows that they are no more together, and she agreed to that. And when he was warning her about that, his gun was placed on his table while he was close to the table.

Check also:  Woman Beats Up Her Boss With A Mop Stick For Sending Her Inappropriate $£x Texts (+Video)

According to her, she said that while they were discussing about the matter, her phone rang. Then, as she picked the call and tried to talk with the caller, the man shot her from behind which the bullet penetrated through her lower ear and left through her mouth which you can see in the photos. She collapsed immediately after the gunshot.

She didn’t know how she got to the hospital, she was treated, and now her mouth is disfigured. The area around her mouth, chin, cheek and jaw were badly affected and disfigured. Right now, she doesn’t talk clearly anymore because of the effect of the gunshot. Sometimes, she checks through her phone to see her photos before the incident. When she sees how pretty she was then, she sheds tears.