South Africa based Zimbabwean model, Monalisa Henrieta Chavura, popularly known as Njuzu has taken to social media to threaten to commit suicide after her bedroom videos was leaked on social media.

According to Njuzu, she suspects her love rival, Ms Shally of being behind the leakage which was sent to her boyfriend Hell Commander. The curvy socilalite made some suicide threats in a post on social media which indicates that she is going through the phase of depression after her nudes were leaked.

She also directed her beloved mother to take of her son and to keep reminding him that she really loved him.

This is what she had to say; ”It’s unfortunate my nudes leaked but on the other hand I’m low key excited you all got a chance to see chikafu cha trevor”. 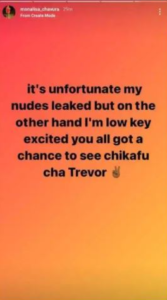 Two Slay Queen tear each other apart as exchange kicks and...