Tension is looming in the Suhum Municipality of the Eastern Region between the family of Srah -Okanta and the management of the Suhum Government Hospital over the disappearance of their chief’s body at the facility morgue.

Nene Kofi Padi, 96, the chief of Srah-Okanta, a farming community near Suhum reportedly died on January 4, 2021 when he was admitted to the hospital for treatment, and his corpse was deposited at the hospital morgue.

The family of the late chief last week stormed the hospital to retrieve the body for burial, but due to the Easter festivity, they were told by the management of the hospital to come for the body this weekend.

The family on Thursday night stormed the hospital morgue to retrieve the body but after processing the necessary documents, the body was nowhere to be found.

The disappearance of the body has created feud and misunderstanding between the family and the hospital management.

Interestingly, the late Chief’s son identified as Antwi is working at the hospital as a security man. 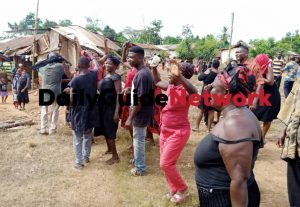 The security man said he always checked on the body until a month ago that he was told they have changed the position of the body at the morgue so he should be patient.

DGN Online gathered that the Hospital three weeks ago gave out some of the bodies to other families which they suspect it has been exchanged with another body.

Meanwhile, the family has invited some chiefs from other towns to mourn with them but the disappearance of the body had jolted them.

The head of the family, Apostle Padi Ologo who expressed worry over the incident said the management of the hospital has not been able to tell them anything about the missing body, adding that they only said they suspect the body had been swapped with someone’s.

He said the incident has cost them a lot since they have planned for the funeral and invited other chiefs from far only to end up with embarrassment.

Meanwhile, the family has reported the matter to the Suhum Police for investigation.

A visit to the community by DGN revealed stranded mourners after hearing the disappearance of the body.

The family has already mounted canopies and chairs, in preparation for the burial.

The late chief’s wife, Afi Anyanome, who was in tears said her late husband married her for the past 35 years. She said the sad incident has turned into a disgrace to the family.

She appealed to the Police to investigate the matter.

The late chief left behind a wife and five children.

However, the management of the Suhum Government Hospital when contacted declined to comment.

The new Administrator of the Hospital, who only gave his name as Samuel, said they have reported the matter to the police to investigate it.

The Suhum Police Commanderr, Chief Supt. Joseph Owusu when contacted said the matter has been reported to them and they are investigating it. VIDEO: Side Chic & And Main Chic Fight In A Hospital Over Who Would Be Beside Their Sick Boyfriend

Thunder fire any boy who tries to leave their girlfriend because...

Rich man poor dressing – Medikal attacked for his attire in...