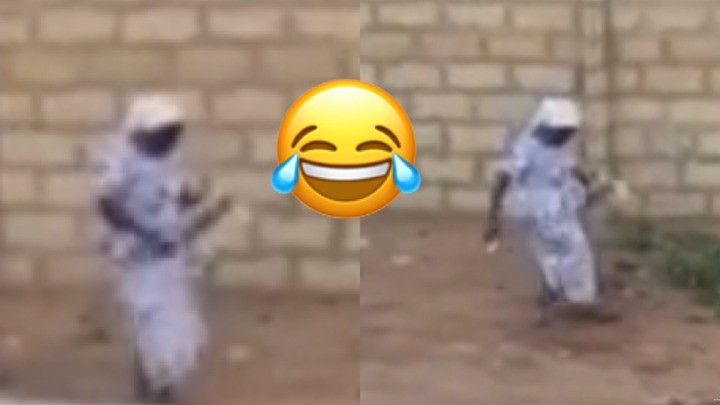 In as much as fast-rising rapper, Yaw Tog is been troll on social media most especially Twitter after dropping some freestyle last night, a short video sighted on the Instagram page of Teacher Kwadwo sees a woman dropping some crazy dance moves on his ‘sore’ song and it really hilarious.

In the video fast trending on social media, one could tell that, the woman have perhaps had a successful mission as she could be seen happily dance to the song even on her way to church.

It not known what could led to such excitement but from the video, one can also say the woman is a die hard fan of the young rapper as she gave some leg moves Yaw Tog gave in the sore music video.

The video have received a lot of reactions from netizens as they hail her for a great dance moves display.

She stopped on the way, looked behind her to be sure no one is watching and started executing the dance moves of the Kumerica boys, specifically the leg moves which could be seen in Yaw Tog’s hit song, Sore visuals.

Sister Derby gives Medikal a taste of what he is missing...

Shatta Wale Proves Again That He Is B!G – He Shows...