A 37-year suspected goat thief, Godwin Amuzu who claims to be a resident of Mankessim Adumadze was nearly lynched for stealing goats at Ekumfi Dunkwa in Ekumfi District of the Central Region Friday.

The angry community members failed to hand him over to the police after arresting him but rather stripped him naked, tied him to a pole, beat him up, and allowed him to go free.

The suspect was found with maize in a sack used for trapping the goats. There have been reports of goat theft in Ekumfi Dunkwa.

Mr Dennis Acquah a landlord, told Kasapa News Yaw Boagyan that,one of his tenants informed him that her husband on his way from the toilet, saw a stranger snaring the animals with corn, the tactics employed by goat thieves.

The landlord then quickly traced him with some people in the community and arrested him. 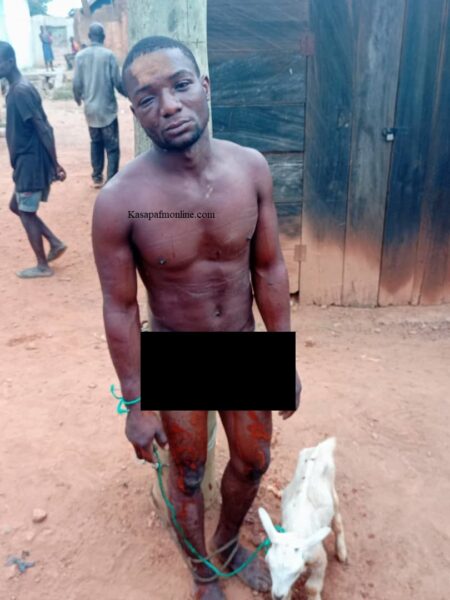 The suspect denied being a goat thief but rather a mason who had come from a nearby town to fill a house under construction.

He narrated that he is not a thief but came to a nearby town to fill a house under construction.

The suspect was questioned about what he was doing with the maize but he said it is a spiritual direction from his gods.

He explained that whenever he recites some words and consume 7 of the maize seeds, he communicates with his gods. Man nearly lynched for stealing meat, stew and other items at Wassa Akropong

Husband tells Wife’s lover to continue ‘eating’ her after catching them...

Here Is The Reason Why “Bebe Gal” Is Trending Number 1...