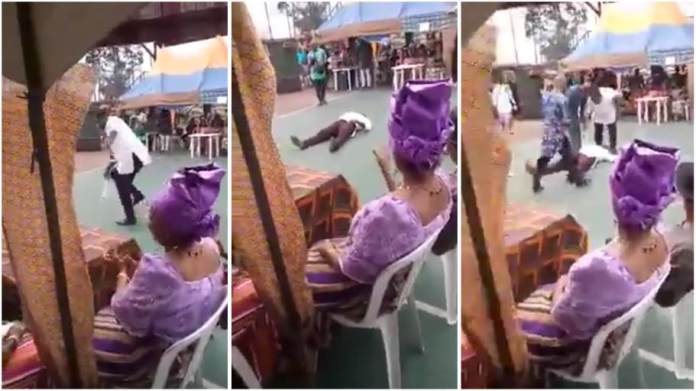 Man slumps and dies while dancing at an event; Sad video drops [watch]

A yet-to-be identified man reportedly collapsed and died after suffering from a heart attack while dancing at an event.

In a trending video, The man clad in a white top and a black trouser, took to the center stage to entertain the guests with his dance steps. He danced well to the admiration of the attendees.

Suddenly, he fell in a shocking way, which didn’t make the crowd understand early that he had suffered a heart attack – (Cardiac arrest).

Check also:  Man forced to eat live chicken after he was caught stealing

The crowd continued to cheer him, because they thought it was part of the dance.

until he wasn’t able to stand up after some time. They took a closer look and discovered he had stopped breathing.

Unconfirmed reports claim the deceased is the chairman of a local government in Rivers state (Nigerian).

Lady whips boyfriend with waistbeads and injures him with broken bottle...

At0pa Video of Husband and Wife Ch0p!ng Themselves Inside the Bush...