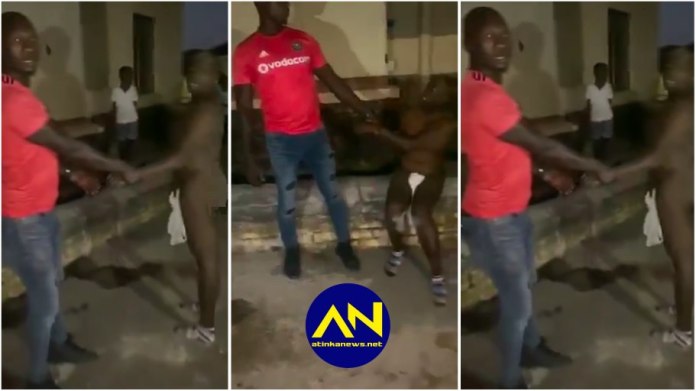 A man was b£aten like a sick dog after he was caught r£d-handed exchanging fluids with a married woman in her matrimonial bed.

The stupid man broke one of Team Zion’s rules which clearly states that, ‘a married woman’s house is a no go zone’ and ended up cursing the day he was born after he was caught red handed eating the forbidden.

The cheating woman’s husband stormed his matrimonial home after learning that his wife’s clandestine lover was in the house busy reaping where he didn’t sow.

The video of the man being attacked , after he was caught cheating with another man’s wife, has gone viral.

The video, seemingly taken at night, shows a man who’s just pulled a cheater from his house into the streets. Neighbours continue taking videos.

The husband used all manner of weapons to discipline the man who was left begging for mercy but his endless pleas fell on deaf ears.

The man (husband) says the guy was found with his wife and he wants to teach him a lesson.

“This person, I spoke to him nicely and he refused. I wanted to talk to him and he tried to run away. He said While holding the hand of the alleged cheater, refusing to let him go.

The man addresses the crowd gathered to witness the ordeal: “Please take pictures, This is what I’m dealing with.”

“I want to go with this man to his wife and I want the police to go with me with this guy looking like this.”. Click Here To Watch The Video

MONEY RITUALS: Man arrested by police while on his way to...