Home Entertainment News See What A Security Camera Caught A Lady Doing After She Saw... 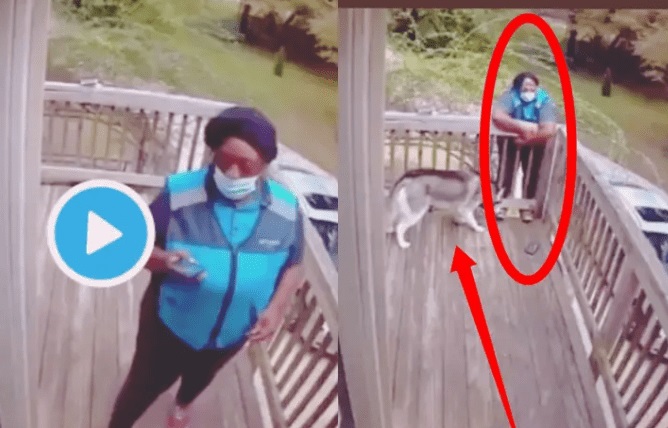 According to the definition, fear is an unpleasant emotion or concept that you experience when you are afraid or concerned about something. The woman in this video, on the other hand, was most likely afraid by something rather than by anybody.

Whatever it is that terrifies everyone on this earth, no matter how strong or courageous they are, there must be something. Rats terrify me, to say the least. Although it was obvious that this woman was terrified of dogs, what she did was unusual.

A lady clothed in a blue shirt and black pants did something unexpected out of anxiety after spotting a dog, according to a video released by @naija PR. As shown in the video, the woman arrived to deliver a delivery but instead discovered her nightmare.

She came to a stop when she turned around to return downstairs, as if she had seen something terrifying, but the security camera failed to pick it up at first. She then shifted her weight and moved over to the balcony’s edge. As the dog neared, her fear overpowered her and she was forced to climb to the other side of the balcony.

She started crying for assistance because she was afraid of falling or being mauled by the dog. However, a white lady from the home appeared with her son following her continuous calls for help. She was rescued safely in the end. On the internet, this has generated a wide range of reactions.

“So nobody’s daughter will make me a husband” Daniel Duncan Williams...

Nana Ama McBrown Causes Bulldog To Be Confused After She Gave...