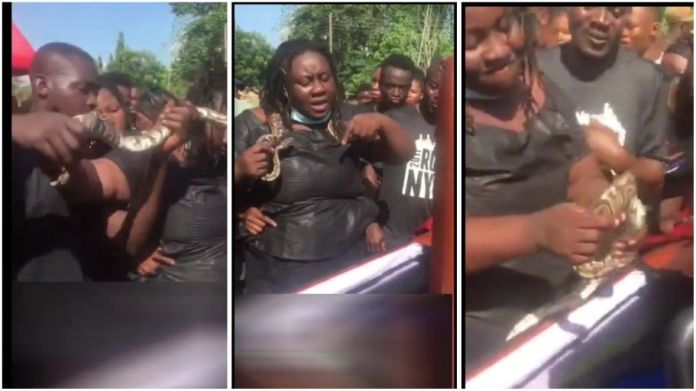 A video of a wife paying her last respects to her dead husband during a burial by performing crazy rituals has emerged and shocked Netizens.

Every day, we live life like tomorrow is promised. However, death is an inevitable thing that every soul must face and no one knows when their time will come.

In a video circulating on social media, a woman, believed to be a Ghanaian, is spotted burying her husband with a live snake that killed him.

The python was seen hanging around her neck until it was time to say her final words as pallbearers get ready to carry the body to its final resting place.

Check also:  Lady B£ats her Best Friend nak£dly after she [email protected] her sl££ping with her husband (+Video)

A background voice narrating why she embarked on the ritual said the snake bit the tongue of the deceased and that was how he met his untimely death, hence she thought it apt to bury him with what killed him.

According to some friends, the young man used to play with snakes and his close python bit his tongue when he was trying to put it into his mouth.

The wife was seen putting one of his snakes into the casket as part of burial rituals for her late husband.