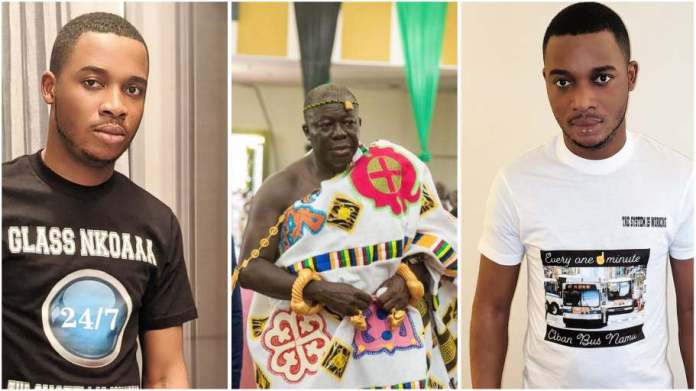 Twene Jonas has been under pressure to render an apology to the Asantehene after he made remarks about him that have been deemed insulting.

Twene Jonas, in one of his many videos, mentioned the Asante king while blasting Ghanaian chiefs and leaders in his latest rant about galamsey destroying water bodies.

This was taken by many Ghanaians on social media as derogatory to the Asantehene leading to calls for him to apologise.

But in a new video, Twene Jonas has stated without mincing words that he is not going to apologise to anybody because all leaders are not wise.

‘All Ghanaian leaders, from A to Z, are fools and if they want me to stop insulting them, they should make the country better,” the adamant Jonas was heard saying.

Speaking further, Twene Jonas stated that those who are asking him to apologise to some chiefs should stop and that any chief who has water bodies in his area polluted by galamsey is also not wise.

“To those who are saying I’ve insulted your chief, I’m not going to apologise to anybody because once the chief has polluted water bodies in his area, he is a fool. “If you like, let your chief ensure that the water bodies are clear so you can bring it on Facebook and tell me to exempt that chief from the blasting,” he said.