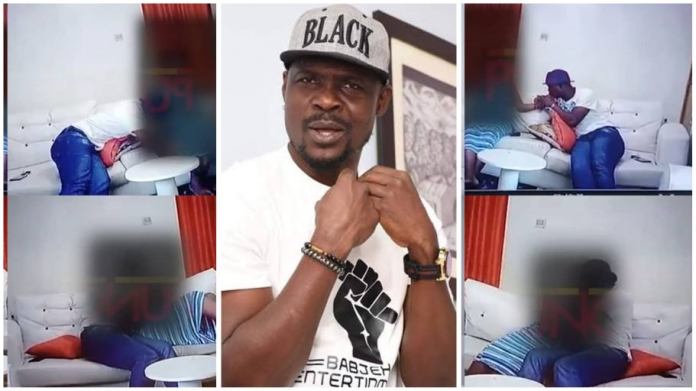 A CCTV footage that captured Nollywood actor Baba Ijesha indecently assaulting a 14-year-old girl has been released to the public.

Baba Ijesha was caught in the act after the victim’s foster mother, Comedienne Princess, installed a CCTV camera in her home after she learned that her daughter was being molested.

The video which has since gone viral on social media has the disgraced actor fondling and kissing the sensitive parts of the little girl.

The actor was also also seen licking the fingers on the left hand of the victim and caressing the minor’s legs and thighs with his left hand.

Baba Ijesha was again seen in the footage, standing with the victim in the parlour, hugging the minor and using his two hands to caress the victim’s buttocks.

The victim, however, disengaged herself from Baba Ijesha, who clung to her. Afterwards, the actor was seen using both hands to caress the minor’s head.

The footage also showed him bending the victim to a corner on the sofa and kissing the minor. Again, the 14-year-old girl disengaged herself from Baba Ijesha’s grip.

Prior to that, Princess is seen leaving the apartment alone with the actor and the young girl.

Another section of the CCTV footage shows the actor pleading after he was caught molesting the young girl in the living room area of the house.