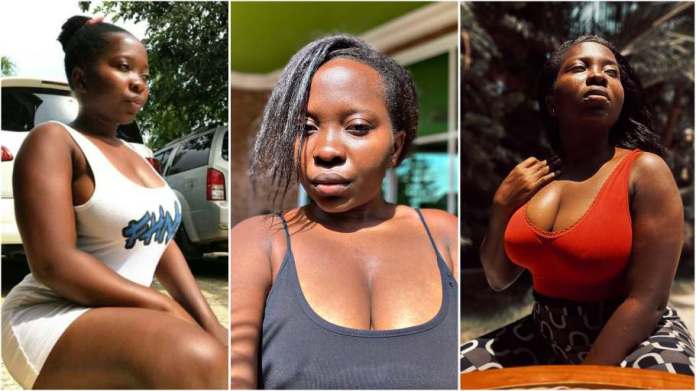 Ghanaian Slay Queen and Twitter influencer Akua Saucy whose indecent pictures and videos went viral has finally opened up on how it all happened.

In an exclusive interview with Rashad on GhPage TV, Akua saucy explained how her naked pictures and videos surfaced online.

Akua Saucy revealed that she met a guy on Instagram who expressed interest in her and decided to start a relationship with her.

According to her, she wasn’t interested in being in a relationship and informed the guy about her intentions.

She explained that the guy accepted to be just friends and later purchased a phone worth 900 cedis for her.

Akua Saucy added that the guy who resides in the United States of America decided to send her 50 cedis weekly for her upkeep.

Check also:  Popular SA Couple Are Trending On Twitter Because Of This Video [WATCH NOW]

She then decided to send her bedroom pictures and videos to the guy out of gratitude for purchasing the phone for her.

The social media sensation revealed that later she fell in love with another guy and decided to be in a relationship with him which infuriated her friend in the United States.

He later threatened to share her private videos online for refusing his proposal and also taking him for a ride.

Akua Saucy originally known as Patience Nana Akua Asiedua Okine indicated that he collected the phone he purchased for her.

After threatening to destroy Akua Saucy’s life for not accepting his love advances, he shared her pictures and videos on Twitter which went viral.

Watch the exclusive interview below;

We Will Give Your Boyfriend’s Dgggy & Fox Style This Christmas’-...