There was drama and confusion after a man got stuck while eating the forbidden fruit of a married woman.

According to reports, the cunning man was fond of sneaking into a lodging with a married woman who happens to be her lover. When the woman’s husband discovered this, he sought the services of a witch doctor who gave him charms.

The aggrieved husband is said to have ‘locked’ his wife using the charms and when she went to have a secret escapade with her illicit lover , they got stuck.

The shameful incident occurred at Gulu city, in the Northern Region of Uganda where residents gathered to catch a glimpse of the adulterous woman and her illicit lover

According to a Facebook user, Pai Robins OgwengAkiiki who shared the story, the duo started screaming for help after their own attempts to disentangle failed and they began to feel pain.

Their cry attracted residents to the scene before police were calledb.Interestingly, as soon as the woman’s husband arrived and touched her waist and that of his rival, they separated effortlessly. 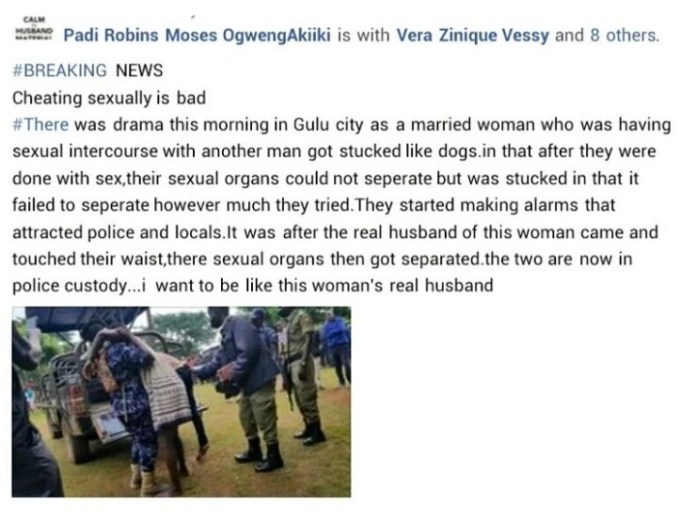 Another daylight robbery at Weija ; robbers bolt with money in rambo style [video ]

I was never pregnant, don’t prosecute me’ – ‘Kidnapped’ Takoradi woman...

Bride runs away from wedding venue after after finding out her...

Another daylight robbery at Weija ; robbers bolt with money in...